apparently ff tdm isnt possible, so i tried something else

gameplay: so, you cant capture while the enemy player with team colored flag(red/blue) is still alive. this means you either send your best player to take steal that flag so that he has the best chances of defending himself, or you send your worst player, so that he can run and stall, thus preventing enemy team from capping, while the two others attempt to kill the enemy with the team colored flag.

i didnt have the codes for our current FF maps, so i just edited my own purely to provde a visual aid. however this is a game mode that could be implemented for all of the current ff maps:

current issues with all of the maps:
likely changes will be increasing map size so that it takes longer to cap and thus increasing chances of recovery if you die. or adding elevations in base and allowing a small amount of gunfire to ecape from base. overall, we'd like to hear your thoughts. is the game mode something you would want to see on server or nah 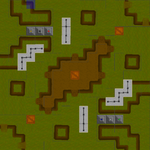 I wanna play this fam

Yes, let's try it out. I love FF-fights.

I really want to play this. This will be my game mode. I will be the best.
You must log in or register to reply here.
Share:
Share Link
Top Bottom