Hey everybody, working on rusting off my map making skills with something pretty basic, a symmetrical 4-way island design. It's pretty similar to a few different maps that have popped up over time but I really like how it turned out actually. I'm not quite sure if I like it as a TDM or a FFA map more, for FFA I picture you trying to "control" an island while attacking others that "control" their island from the middle, while dealing with new people respawning on your island. Each island offers quite a bit of highground that has pretty good spray potential around that same island, but spray paths between islands are limited to only the riskiest positions. TDM I think would rely a lot more on control of consecutive highgrounds, if you could post up on your island as well as a neighboring island you could provide enough cover fire to supress a team pretty well. 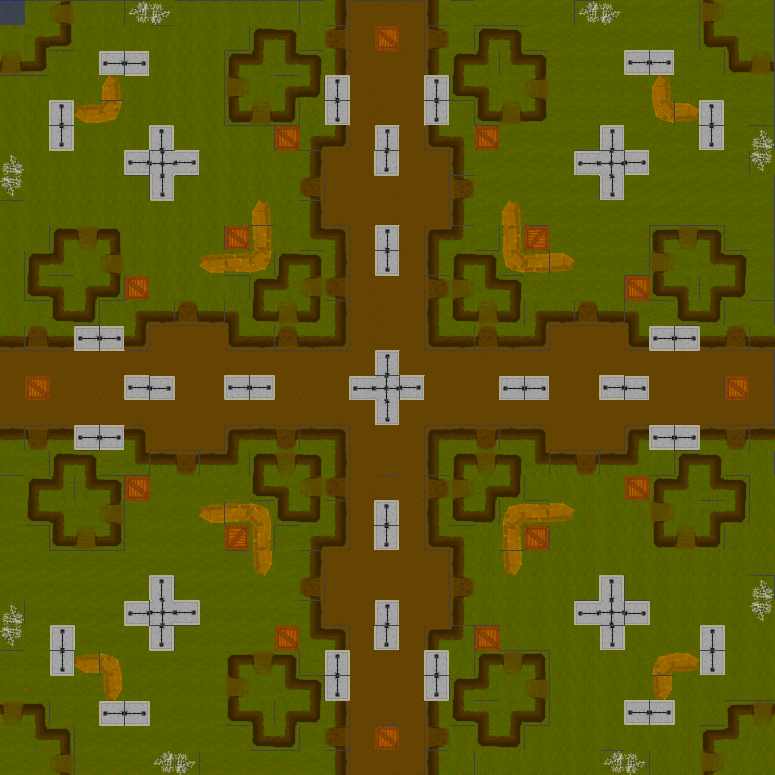 BTW I measured and you can see a 19x19 tile area when in-game. This means if you were standing up against the 4 way wall in the middle of one island you'd be able to see to the walls between the islands, if you're standing one of the four middle dangerous highgrounds you can see each of the other highgrounds right on the edge of your screen. Same concept for the other high grounds between islands, you should be able to see the counterpart just on the edge of your screen for long distance firefights with the ability to try and back out of sight if needed.

It looks like a version two of Bloodbath. I feel like Lancers/Assualts/Heavys will just go to the island nearest to them and play it like Bloodbath and will melee camp the entrances for Recons. Recons will probably gravitate towards the lower elevation/pit and have knife fights there. Overall this is an interesting map but it would be nice if you could tweak it around a bit so that Recons could have chances to play around in the islands as well.