How would Pawn Tactics Look and Feel as a Mobile Game?

A mobile port of Pawn Tactics has been often mentioned, how ever the controls are too complicated for the game to be ported without modification. I tried survivio on a full touch screen phone and it was very difficult to control especially when held in hand. What are your ideas for a Pawn Tactics mobile port?

if fortnite can be mobile, so can PT

A thumbstick on the bottom left that allows users to control their directions and a list of available weapons on the bottom right. Players can change weapons by clicking on one of those icons and aim / shoot with their right thumb.
Last edited: March 12, 2019

I think it is possible, and I actually don't believe it will be that hard to play. I just don't know how enjoyable it would be.
Even though Mini Militia is a sideways view rather than top down, I see a lot of similarities between it and PT.

I've seen multiple top down shooters on mobile with excellent controls. PT control implementation is actually one of the easiest to implement imho. I don't play much PT, but if I had to design a UI around it, I would:

Right joystick: shooting
- you can aim without shooting if your thumb stays within a certain area of the circle joystick
- you will shoot if your thumb moves outside an area of the circle
- aiming will be "blind" as in, you will shoot in the direction that you point the joystick. shouldn't be a problem since every bullet in the game is drawn out already, so players can adjust their shots by holding down the fire joystick

Toggle Running/Walking
- option 1: dedicated button press to run
- option 2: within a certain circle area lets you walk. moving your thumb away from the center of the joystick into a larger area allows for running

Grenades/Thrown items
- tap to place grenades on screen since it's a top down shooter. just switch to it from the weapons screen

Alternative Fire
- probably the hardest to pull off. maybe a button that mimics L/R buttons on traditional game controls in upper corners of the screen, so you can use your index fingers to tap them quickly. I definitely would avoid a dedicated button in top screen corners for regular shooting though, due to very awkward hand positioning. Reserve the top corners for things you don't need to click as much
- or just tap on screen where you want to use alternative fire. Are there even guns with alt fire in PT? if yes, I'd assume they have less ammo than main guns, so just tapping where you want to shoot should be good enough. Allows players to keep the left hand on movement joystick, while dedicating right hand to switch between shooting regular guns with joystick and tapping on screen for alt fire/using grenades 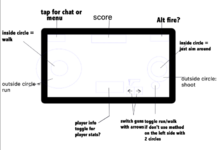 PC version > mobile version.
Even decent mobile games (GTA San Andreas, Fortnite, etc) are relatively sloppy compared to their PC counterparts.
But you'd reach a bigger target group with a mobile port. Amd people can play while they're outside.
It'd be a big advantage.


But are you sure you want to focus on two different versions of PT (three versions if you try to add a iOS and Android app)?
I'd rather have more PT updates than a mobile app.

Zylinderknopf said:
But are you sure you want to focus on two different versions of PT (three versions if you try to add a iOS and Android app)?
I'd rather have more PT updates than a mobile app.

It wouldn’t be multiple versions, one code base would be able to target multiple platforms and respond by loading the appropriate control input system.

I actually play multiple online games on mobile such as PUBG, Mobile Legends, etc. Top down is very common, check out Brawl Stars (same company as Clash of Clans). Smooth controls, just need to add utilities switching which shouldn't be much more.

I got decent at playing recon from iPhone. So I think mobile PT can definitely be a thing.

I'm anti-mobile gaming, but for some reason little kids can't get enough of it which might be good for our KDAs!

zen said:
I'm anti-mobile gaming, but for some reason little kids can't get enough of it which might be good for our KDAs!
Click to expand...

Oh stop! Now I really want there to be a mobile port.

When Oldschool Runescape got ported to mobile, it saw a huge influx in players. (Especially those dumb enough to bring their good items into the wilderness after they used mommy's credit card to buy bonds) So it would be awesome for those who still care about KDR or who are just looking for a game to play.

Has anything been done about spawncamping yet? I rage quit most of the time because there's no invincibility timers.

da2shae said:
Has anything been done about spawncamping yet? I rage quit most of the time because there's no invincibility timers.
Click to expand...

I don't think you should have said that m8. Don't make Brother Chernobyl come after you.
Last edited: March 12, 2019

FireflyXD said:
I don't think you should have said that m8. Don't make Brother Chernobyl come after you.
Click to expand...

Also to those who are against the mobile port because mobile ports are usually bad, every game company benefits by making their product more available to the public. Throwing pawn tactics into the app store is like tapping into the artery that contains this game's target audience: Kids with too much time on their hands.

This is, of course, if they can put together some kind of advertising budget and also be able to handle updating the game long-term. Then there's QA testing for damn near every last phone out there. This is a wild change we're talking about now that I think about it.

da2shae said:
Well he can't spawncamp me if I dont spawn in the first place
Click to expand...

When did I say anything about spawn camping?

I remember years back @fadingbreeze told me he was playing PT on his Nintendo DS and I believed him :/

Location
Right behind you!

I personally found the cell phone version of surviv.io to be a disaster. Pawn Tactics is slightly simpler, and so might be slightly better. But probably not by much.

MS's cloud based functionality entails some determined mobile basis. It does require streaming either from a platformed TV or console. External imports for mobiles are on market via site. Far as pawn app. intros to mobile gl.

The real question is how would Alex look and feel if he wasn’t mentally impaired.
You must log in or register to reply here.
Share:
Share Link
Top Bottom